Here I thought if you are new to this, you are going to want a place where you can see the symptoms instead of scrolling through so many different kinds of brain tumors. So here I have provided a list of common ones. If your child is experiencing any of these, go to your doctor.
(from National Institute of Health: http://www.nlm.nih.gov/medlineplus/braincancer.html)
From here, you need to check out the different types of brain tumors (courtesy of the National Brain Tumor Society). If you know what kind of tumor you or your child has already, then locate it. Each page gives a brief description on the tumor and the symptoms, as well as many other useful facts.

If there is a brain tumor type that I am missing, please email me at amritoch@gmail.com and I will add it to the list. 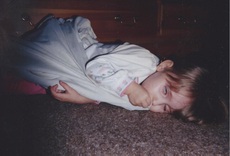 When Misha was three months old, she displayed many symptoms of having a brain tumor.  While she slept, her right eye would remain open, with the eyeball rolled up in the back of her head (see picture to the left).  She would also cry for no reason at all.  The pediatrician’s explanations for these happenings were “Babies are quirky” and “Babies cry”.

It was when Misha was four months old when she began throwing up more than usual. Immediately after the third or fourth bottle my parents would give her, she would throw up all her formula.  When this happened my parents did not know if they just fed her too much or played with her too hard (Misha like to play a lot when she was a baby).  The pediatrician gave his curt response: “You’re over feeding her.” Not once did he listen to my parents when they said something was wrong.  In fact, he once asked my mom, “Mari, do you want your daughter to be sick?”

There was one instance in particular when the pediatrician finally listened.  My family was at a restaurant they owned at the time in Laguna Beach.  It was an extremely hot day (and when it’s hot, your face gets flushed, right?).  Misha’s face was only half flushed.  There was a line down the center of her face that showed the contrast in skin color: the right side was flushed red, the left was not.  This was definitely not normal.

This time it was my dad who called the pediatrician instead of my mom.  He told him, “You will see my daughter on Monday.” And he did.  They went in that Monday, and after close examination the pediatrician concluded that it was Bell’s Palsy (a disorder of the nerve that controls the movement of facial muscles. Damage to this nerve causes paralysis in the facial muscles).  Misha was referred to a neurologist at Children’s Hospital of Orange County (CHOC), Jeffery Levine, who also said it was Bell’s palsy. Dr. Levine ordered an MRI for Misha, just in case. One week later, a tumor the size of a golf ball was discovered in her brain.